In late 2003 a group of leading PC, graphics and semiconductor companies got together to plan a new digital display interface standard to meet future demands on the interface and to reduce display cost and complexity. The goal was to develop an open standard based, royalty free and extensible interface suited for both external desktop monitor and internal display interfaces, and to have it ready for implementation in products in 2006. This group was the start of the Video Electronics Standard Association (VESA) which is an international non-profit corporation that supports and sets industry wide interface standards for the PC, workstation and consumer electronics industries.

The new interface would replace the proprietary digital visual interface (DVI) used between the PC and an external display. This interface could not be updated and had physical, functional and cost limitations that inhibited its suitability for future needs.
The DisplayPort standard specifies a high bandwidth, bi-directional display interconnect that enables a common interface approach for internal and external display connectivity. The DisplayPort interface features optional audio capability.
This standard provides an open and extensible royalty free specification that meets the current and future needs of the PC industry without the restrictions associated with the other interfaces technology. 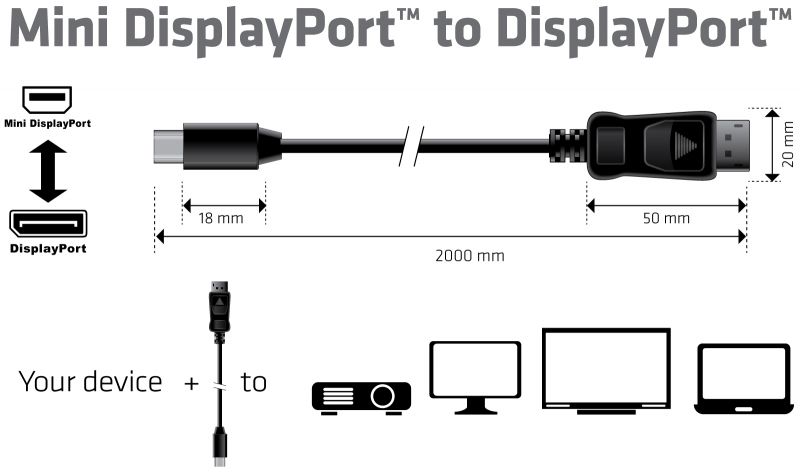 The first generation of DisplayPort provided over 10.8Gbps of raw bandwidth, which no other display interface could match. DisplayPort also supported very long non -active cables, optional latch designs for connectors and audio support. In addition, with DisplayPort spread spectrum clocking can be enabled to reduce EMI, and souce devices such as GPUs can operate in dual-mode. The latter is valuable for it allows the same connector to transport TMDS signals to Support DVI and HDMI outputs using inexpensive level shifting adapters.

The data link rates of DisplayPort 1.1 are fixed at either 1.62Gbps per lane or 2.7Gbps per lane, irrespective of the timing of the attached display device. This design only requires a single reference clock source to drive as many DisplayPort streams as there are display pipelines in the GPU. In contrast DVI and HDMI both require a dedicated clock source per display timing. This unique DisplayPort feature allows for the most efficient multi-display design and complements AMD Eyefinity multi display technology.
In early 2010 the DisplayPort 1.2 specification was confirmed by VESA, this new revision of the standard adds support for new and exciting feature , including High Bit rate audio even higher bandwidth from 10.8Gbps to 21.6Gbps and multi stream capabilities.
In the last quarter of 2014 the DisplayPort 1.3 was approved which increased bandwidth to 32.4Gbps with the new HBR3 mode featuring 8.1Gbps per lane up from 5.4Gbps with HBR2 in version 1.2
In March 2016 the DisplayPort 1.4 was published, it still uses HBR3 mode but adds supports for Display Stream Compression 1.2 (DSC) and the next generation for DisplayPort will improve link rate from 8.1 to 10Gbps which will increase total bandwidth from 32.4 to 40 Gbps

DisplayPort 2.0, which was introduced in June 2019, provides up to a 3X increase in data bandwidth performance compared to the previous version of DisplayPort, as well as new capabilities to address future performance requirements of displays. These include beyond-8K resolutions, higher refresh rates and high dynamic range (HDR) support at higher resolutions, improved support for multiple display configurations, as well as improved user experience with augmented/virtual (AR/VR) displays, including support for 4K-and-beyond VR resolutions. Featuring the highly efficient 128b/132b channel coding shared with USB4, DisplayPort 2.0 delivers a maximum payload of 77.37 Gbps across four lanes (up to 19.34 Gbps per lane)-supporting ultra-high display performance configurations such as an 8K (7680×4320) display with 60Hz refresh rate with full-color 30 bpp 4:4:4 HDR resolution uncompressed, and 16K (15360×8640) 60Hz display with 30 bpp 4:4:4 HDR resolution with compression. With the release of DisplayPort Alt Mode 2.0, all of these high-performance video capabilities are now available to the USB ecosystem.